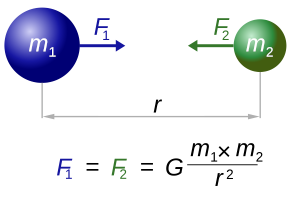 How to Calculate the Force of Gravity

The gravitational constant G has been researched extensively since its discovery. As of 2018, the most recent and accurate value for it is 6.6743×10-11 N-m2⁄kg2.

The calculator on this page is written in the programming language JavaScript (abbreviated as JS). When an input to one of the textboxes or unit drop-down boxes is detected, the function gravity is run by your internet browser’s JS engine. The browser’s built-in JS engine allows the calculator to provide near-instant results.

The code itself is very simple. First, it converts the inputted numbers to the standard units used in the universal gravitation formula. Then, it applies the same force formula as given in the lesson above. The answer is converted to the desired output units (such as kN or GN). That answer is rounded to the 4th decimal place and displayed as the solution.