The Three Laws of Motion

Sir Isaac Newton’s three laws of motion lay the groundwork for what we study in classical mechanics, the physics study of how objects move. The three laws are given as:

Newton’s first law — the law of inertia — an object at rest or at constant velocity stays in that state unless acted on by a net external force.

Newton’s second law — the law of force and acceleration — the net external force acting on an object is equal to its mass times acceleration, such that F = m×a.

Newton’s first law of motion describes the concept of inertia. By definition, inertia is the tendency of an object to remain in its current state unless acted on by a net external force.

If, for example, the car increased its driving force Fapp such that it became greater in magnitude than the drag force Fdrag, the car’s velocity would increase, and its state would change.

Newton’s second law of motion provides us with one of the most important equations in physics — F = m×a, where F is the net external force acting on the object, m is the mass of the object, and a is the acceleration experienced by the object.

The force equation rearranged for each parameter.

We can maneuver variables around this equation to solve for any of the three parameters. We can also apply this formula along any direction at our convenience, for example, to solve along the x-axis only we would use Fx = m×ax.

Newton’s third law of motion provides the basis for reaction forces. A reaction force is opposite in direction and equal in magnitude to the original force and always occurs when a force is applied. 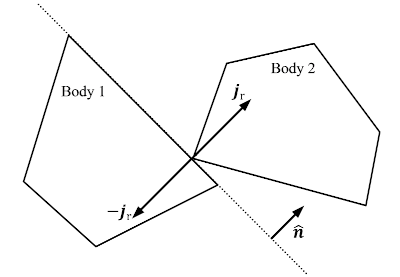 The opposite direction and equal in magnitude
reaction force -jr during a collision between objects.

Reaction forces are responsible for many common aspects of reality, an example being the weight we feel from Earth’s gravity. Gravity is an external force that pulls us down to Earth’s surface, where our body applies a force called weight to the ground.