The Definition of Conservation of Momentum

The law of conservation of momentum tells us that in closed and isolated systems, the sum of all objects’ momentum stays constant. This means that momentum cannot be created or destroyed, it is conserved.

The general equation for conservation of momentum during a collision between n number of objects is given as: 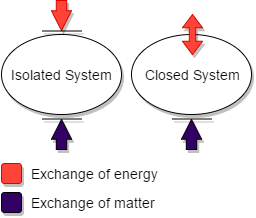 These system types are important to understand because we study momentum problems in simplified versions of reality — closed and isolated systems — so that we only have to keep track of momentum within the system.

In real life, closed and isolated systems do not exist. Even if an object is placed in a remote spot in the vacuum of space, there will be small gravitational forces, electromagnetic energy exchange, and even occasional gas particles interacting with it.

However, we can study physics problems in the context of these systems. We can do so because, in certain situations, the forces, matter, and energy of the outside world are negligible, that is, their effect is so small and minuscule that they can be ignored.

How and Why is Momentum Conserved?

Let’s use Newton’s second and third laws to prove that momentum is conserved in the following example problem.

Object #1 has a mass of 2 kg and is moving at 4 m/s when it collides directly with the stationary object #2 which has a mass of 1.5 kg. The collision takes 1 second and has a force of 6 N. Let the positive direction be the direction of object #1’s initial velocity. Find the momentum of each object before and after the collision, as well as the total momentum of the system before and after the collision.